What is Bitdefender? What is McAfee? What are the differences between them? Which one is better for your PC? If you are looking for the answers to the above questions, this post from MiniTool about Bitdefender vs McAfee is what you need.

Overview of Bitdefender vs McAfee

Bitdefender, founded in 2001, develops and sells antivirus programs, Internet security, endpoint security software, and other network security products and services. It is compatible with Windows OS, macOS, iOS, and Android. 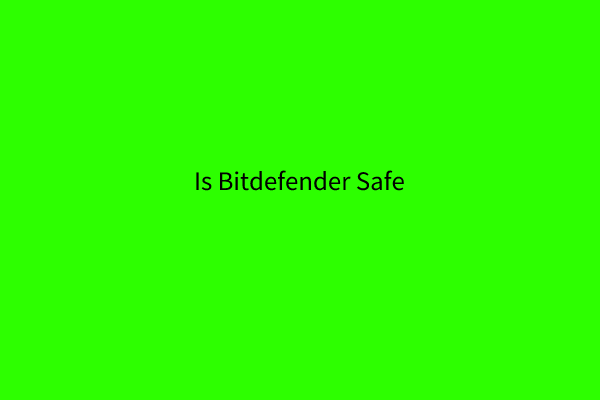 Is Bitdefender Safe to Download/Install/Use? Here Is the Answer!

What is Bitdefender? Is Bitdefender safe to download or to use? If you are looking for the answers, this post can provide some information about Bitdefender.

McAfee is a company that claims to be the world's largest dedicated technology security company. Over the past 30 years, it has protected devices (Windows, macOS, Andriod, and iOS) from viruses, malware, and other threats. 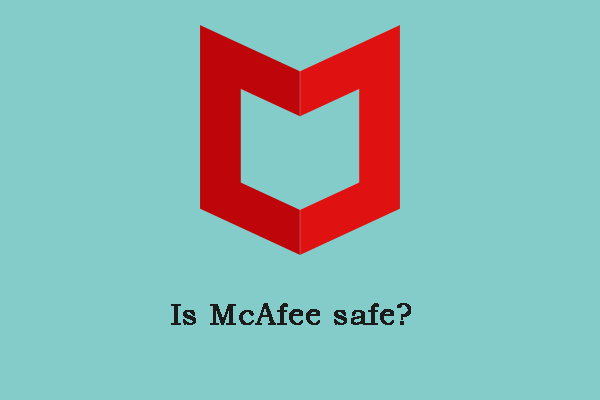 Is McAfee Safe for Your Windows/Mac? Here Are the Answers!

Is McAfee safe? Is McAfee a virus? You may have these questions and do not know whether it is safe to use McAfee on your computer. Here are the answers.

The first aspect of Bitdefender vs McAfee is the interface.

Bitdefender's desktop dashboard is well-designed and every feature is easily accessible. Bitdefender's features fall into three categories: Protection, Privacy, and Utilities. Parental Controls and Anti-Theft Protection are under the Utilities tab, but when you click them, you'll be taken to Bitdefender's online portal.

Bitdefender's Android app is very feature-rich and offers useful extras like excellent security and anti-theft protection. However, the iOS app is limited to only web protection, breach monitoring, and VPN.

McAfee is easy to install and use. The dashboard is intuitive, with everything neatly organized into three buttons: PC, Web, and Identity. Scheduling scans with McAfee is easy. It's also easy to customize firewall protection, access VPNs, and run system tweaks.

You can only access parental controls and identity theft protection through the online dashboard, which is fine, but it would be nice if they were incorporated into the app. McAfee's mobile apps are beautifully designed and easy to navigate. What's more, the iOS app is more feature-rich than Bitdefender.

The second aspect of Bitdefender vs McAfee is the features. Here is a chart about their main difference in features.

Bitdefender protects against malware and potentially unwanted programs (PUPs). It has advanced anti-phishing, anti-fraud, and anti-spam features that help you avoid suspicious websites designed to steal personal information or cause financial loss.

Besides, it has a dedicated SafePay browser that can be accessed directly from the app when you do online banking or shopping.

With a subscription, you also get a password manager, a file shredder, and a VPN with a 200 MB daily limit. Bitdefender antivirus suite includes webcam and microphone protection so that hackers cannot remotely access and monitor your device. 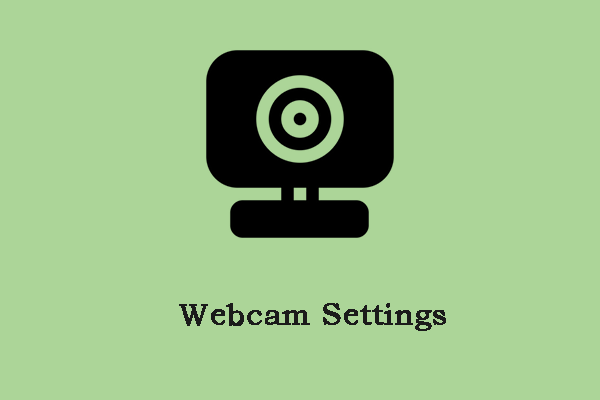 Webcam Settings: How to Access/Change It on Your PC?

With a McAfee subscription, it protects you from malware, ransomware, and online threats. It has a useful web advisor feature that blocks scam and phishing sites, scans your downloads for malicious components, and even notifies you when you enter a website address in the URL bar.

Additionally, McAfee provides identity theft monitoring for up to 10 email addresses to check if your private details have been compromised. You also get a password manager, file shredder, and VPN. However, the latter feature is limited to 500 MB of traffic per month, which is quite a small limit compared to what other suites offer.

Thus, it’s hard to say which one has better features. It is decided by your needs.

Real-time protection is one of the most important attributes of a powerful antivirus suite. It continuously monitors your device for potential threats and stops malware or ransomware before they infect your computer. Thus, this part is about Bitdefender vs McAfee for real-time protection.

McAfee's real-time protection consists of two main features - Ransom Guard and file content conversion. Simply put, this antivirus software closely monitors all your files and online activities. If it detects an attempt to encrypt your data, the malware will be quarantined and a copy of the compromised file will be created immediately so you won’t lose important data.

Bitdefender also has a highly robust real-time protection called Advanced Threat Defense. The antivirus suite is part of the Global Protective Network, which means it has access to an unusually large database of malware, which helps quickly identify the latest cyber threats or new variants of existing threats.

Both antivirus suites have multiple scanning options that you can choose from depending on your needs. If you're in a hurry, you can choose Quick Scan, which is the fastest option available. Keep in mind that it's not that thorough, so it should only be used for occasional checks.

Bitdefender and McAfee have full scans, which we recommend running on your device immediately after installing antivirus software. This scan option checks all files and applications for malicious components and may take some time to complete. However, you will receive a detailed report on the threats found on your computer.

Another important protective property is a firewall, which prevents hackers from connecting to your device. Thus, the fourth aspect of Bitdefender vs McAfee is firewall protection.

With McAfee, you can access this functionality directly on its dashboard. You can manually enable or disable (I strongly recommend not) it by clicking the toggle button. Firewalls create a "barrier" between secure and insecure network connections, preventing malicious people from accessing your computer.

Both McAfee and Bitdefender's firewalls offer network security, but McAfee offers this feature in all of its antivirus plans. For Bitdefender, you can get by subscribing to an Internet Security or Total Security plan. You can adjust network adapter and security settings, as well as application access.

Bitdefender vs McAfee: Impact on System

Using antivirus and antimalware protection on your computer (Windows or macOS) or handheld device (Android smartphone or tablet) should not slow down your device. Let’s see Bitdefender vs McAfee in system impact.

According to the test, Bitdefender took 110 minutes to complete the scan and viewed 4.2 million items. McAfee, on the other hand, took 223 minutes but only scanned 785,000 items. This means that Bitdefender's full scan takes less than half the time of McAfee, but scans more than five times as many items in the reduced time.

Bitdefender has much less impact on memory and CPU utilization than McAfee, which seems to have a much greater impact on PC performance.

This section is about Bitdefender vs McAfee. A virtual private network gives you an extra layer of security on top of antivirus protection software. VPNs are included in McAfee's package and can be included in Bitdefender's overall security features.

While Bitdefender does have a separate secure browser for banking purposes, it also offers a VPN service that gives you full security on top of what you already have. You can choose to add this to your plan for one year. It's not included in the cost of the package you choose, but it can be a worthwhile addition if you value your privacy.

With McAfee, you get a VPN automatically. McAfee's VPN service comes with the package of your choice, but just because it's technically free doesn't mean you'll see quality suffer. Your online activities will remain private, even with McAfee.

The last aspect of the difference between Bitdefender and McAfee is price.

Tip:
1. The McAfee device is not limited to the system, mobile phones, or computers of different systems.
2. The price only represents the price when this article was published. To learn more information about the price of McAfee or Bitdefender, you can go to their official websites.

Bitdefender vs McAfee: Which One to Choose

After knowing the differences between Bitdefender and McAfee, you may want to know which one to choose.

Bitdefender - Winner for performance, extra features, and price. If you are looking for a powerful anti-malware engine with excellent internet security protection in a very intuitive dashboard, choose Bitdefender.

McAfee - Winner for VPNs, password managers, and iOS apps. If you want an Internet security suite with all the tools you need to stay safe online, it’s recommended to choose McAfee.

Back up Your File using MiniTool ShadowMaker

Only using antivirus software to protect your computer is not enough because there may be some problems with the antivirus software such as Bitdefender not working, McAfee not scanning, etc. Therefore, it is recommended for you to use another software to back up your important data to prevent data loss.

Then which backup tool should you choose? MiniTool ShadowMaker is the great one. It is a professional backup tool for Windows, which can allow you to back up files, folders, partitions, disks, and even the system. It is highly recommended to select an external hard drive to save your backup.

Now, let’s see how to back up data with MiniTool ShadowMaker.

Step 1: Double-click MiniTool ShadowMaker to launch it on your computer, then click Keep Trial to get into its main interface.

Step 2: Go to the Backup page. You can find that MiniTool ShadowMaker selects the operating system as the backup source by default. Here, you need to back up files, thus, click Source > Folders and Files, and then choose the files that you want to back up. Click OK.

Step 3: Click the Destination button, choose a destination to save your backup files, and then click OK.

To sum up, this post has listed multiple differences between Bitdefender and McAfee, so after reading this post, you should know which one is more suitable for you. What’s more, it’s recommended to use MiniTool ShadowMaker to better protect your data.

If you have any confusion about this post, leave a comment or send an email to [email protected].