This article set forth by MiniTool Software Ltd. mainly discusses a topic about installing Windows 11 on a 2GB RAM incompatible PC. It gathers many users’ opinions online and makes a conclusion. This post also offers the way to install Win 11 on unsupported old computers, compares the memory usage between Windows 11 and Windows 10, as well as comments on other related themes.

Then, are you able to install the latest Windows 11 on a computer with only 2GB of memory? Or can you install Win11 on unsupported PCs? There are hot topics related to this theme online. Let’s see what users say in some famous forums!

Most people think that Windows 11 can be installed on a PC with only 2GB memory storage space but with some performance decrease.

Yes, you can run Windows 11 on a 2GB RAM computer but it will lag a lot. The official minimum RAM requirement is 4GB and you are recommended to upgrade your memory to 8GB to run Win11 smoothly!

You can but you would not want to. Any laptop over 400 will have at least 4GB or even 8GB memory. Memory isn’t that expensive.

2GB RAM is only the minimum requirement for 64-bit Windows and 1GB RAM for 32-bit. I suggest going for a higher configuration.

Can Unsupported Computers Get Windows 11 Updates?

Meanwhile, some users think it is impossible to install Windows 11 on 2GB RAM.

No, you will need at least 4GB memory for installing Windows 11. If you force to install Win11 on your machine, it will become useless. You cannot take advantage of browsers, work documents, emails, social apps, etc., and even virtual machines. Then, what is the meaning of installing Windows 11; it’s better to stay in Windows 10. If you want to upgrade to Win 11, it is recommended that you add more RAM to your device!

According to the above ideas, it is still possible to install Windows 11 on a computer with 2GB RAM though the chance is little. But all of them agree that the 2GB RAM PC running Win11 will perform badly with extremely slow speed and even useless for you can hardly do things with it. So, it is strongly recommended that you don’t install Win11 on 2GB RAM or upgrade your RAM.

You can still install Windows 11 on an unsupported PC if you sign a waiver offered by Microsoft. Read this post to learn much information about this news.

How to Install Windows 11 on 2GB RAM?

If you insist on installing Windows 11 on 2GB RAM, of course, you can have a try. Yet, your installed apps and personal data may be wiped out during system installation. And, since Windows 11 will probably give you problems due to the small amount of RAM like the common lags and freezing, which may further cause BSOD and data damage/loss, it is of great necessity to create a backup of important files before the installation to ensure the data security.

Therefore, you need to rely on professional and reliable data backup software that can be installed on 2GB of RAM. MiniTool ShadowMaker is your choice. It can back up files/folders, partitions/volumes, systems, and even the entire hard disk.

Just download and install MiniTool ShadowMaker on the 2GB RAM computer; follow its guide to make a backup of your crucial items and save the backup image better on an external storage device. Then, disconnect the external device from the PC.

Unlike the former system installers, Windows 11 installer will first check the compatibility of your computer to see whether it meets the minimum system requirements or not. If it meets, you can continue to install Win11 just like install any other edition of Windows. If not, you won’t be allowed to install the OS.

Therefore, if you want to install Win11 on 2GB memory, you need to do something special like bypassing the check of your hardware’s qualification. Anyhow, just follow the below steps to achieve that!

This post shows you how to bypass Windows 11 requirements including TPM, Secure Boot, and CPU to install the new OS on unsupported PCs.

In the first place, you have to get an installation media of Windows 11. You can directly download Windows 11 ISO file from Microsoft’s official website. Or, you can create a Windows 11 installation USB with the official media creation tool that can also be available on that page. From both the ISO file and installation USB, you can start installing Win 11.

In the second place, you need to edit your Registry Editor to avoid computer compatibility check for installing Windows 11.

3. Right-click on the Setup folder and select New > Key.

4. Rename the new key as LabConfig.

5. Under the LabConfig subfolder, right-click on the blank area in the right section and choose New > DWORD (32-bit) Value.

6. Name the new value as BypassRAMCheck.

7. Double-click on the BypassRAMCheck value and change its Value data to 1 in the popup.

8. Save changes and exit Registry Editor.

Now, you can start to install Windows 11 on a 2GB RAM computer without a compatibility check. Just follow the onscreen instructions and you will smoothly complete the task. The process is similar to installing previous editions of Windows. 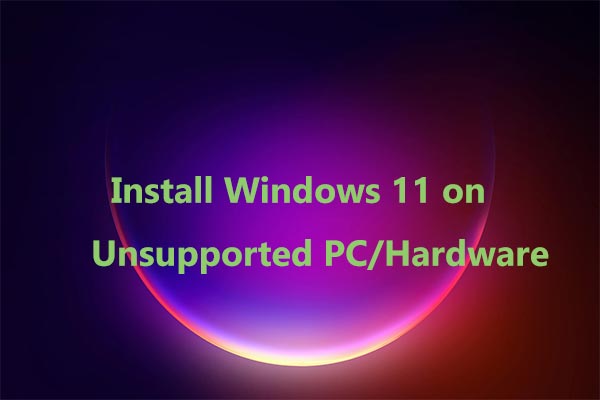 How to Install Windows 11 on Unsupported PC/Hardware? (4 Ways)

How to install Windows 11 on unsupported PCs or hardware if the PC cannot meet system requirements of this new OS? Follow 4 methods below for this task.

Windows 11 occupies 5GB of memory on idle while Windows 10 only uses 3GB. This matters for users who have no upgradable RAM. For instance, I have a 16GB RAM laptop and I can play the most demanding games with great performance and visuals on Win10. Yet, I can’t achieve that on Win11 for the extra 5GB is the difference between being able to play games normally or having to cut graphics back.

I agree with that. On the same computer with the same software and drivers, the RAM usage on different OS is unlike. The following test is with 0 paging taking action.

No cold boot and autorun apps:

After actively using the system and closing all apps:

So, something is going on with Windows 11 memory management system, for better or for worse. 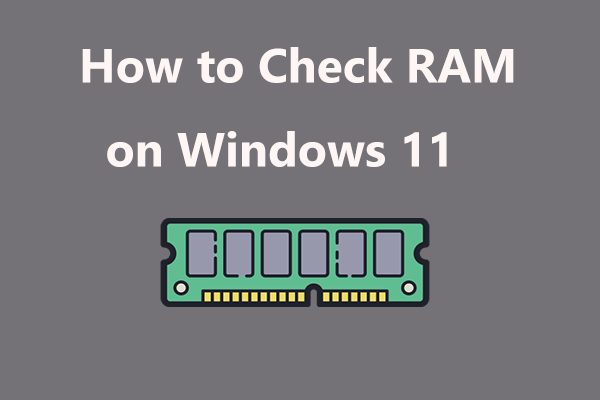 How to check RAM on Windows 11? It is an easy task and you can follow ways in this post to check RAM speed, size, type, and more.

2. No, they consume the same RAM

The system resources consumption for Win 11 is the same as Windows 10. Yet, if you use advanced features, Windows eleven will require more RAM usage.

Windows 11 does require a minimum of 4GB memory. I don’t think its requirement will be substantially larger than that of the most recent version of Windows 10. Based on my experience of running Win10, on a 4GB RAM laptop, it works fine for normal web browsing even for opening two browsers simultaneously. And, 4GB is also enough for programming.

However, on a 4GB RAM desktop, I can’t run a virtual machine. So, I upgraded it to 8GB memory. Those should be the same if you run Windows on 4GB RAM.

Other Topics About Installing Windows 11 on Low-RAM PC

Finally, we also collect some related questions about the memory requirements for installing or running Windows 11 system.

Windows 10 with 4GB RAM performs badly. You can’t play multiple tasks fluently. You can only open one program at a time. You have to wait several minutes to open an item. If you launch several apps, the system will become laggy or even hang up, which forces you to restart the computer to deal with the situation.

In recent years, applications become heavier, 8GB of memory is a must and 16GB is a sweet spot and future-proofed for several years.

Unsupported PCs Will Be Unable to Test Windows 11 Insider Builds

You won’t be able to use an unsupported PC to test Windows 11 Insider builds any more. This post shows you the related information.

Yeah, 8GB memory space is quiet enough for most of the activities on Windows 11. The requirement for RAM largely depends on how you use the computer. That is to say, for what purpose do you use the laptop.

If you use the PC mostly for creating content, writing messages, or simply searching for something, 8GB of memory is pretty enough. If you need to frequently surf the Internet, social like streaming, edit videos, play games, or do multitasks, then, 8GB RAM may be insufficient; you may need to upgrade to higher RAM equipment such as 16 GB or more. BTW, 8GB RAM is a minimum computer configuration in recent years.

For Windows 11 itself, 6GB RAM is fine. Yet, the question is that the extra memory you need to do other things like running a program and editing something. If you are a “light” computer user and just do simple work, 6GB of memory is enough. However, if you rely on the PC a lot and need to conduct complex work on it like video editing and gaming, 6GB is probably not satisfactory.

Although I haven’t tested, it is probably impossible to install Windows eleven on 1GB RAM and you are strongly not to do so. Even if you manage to do so, the system is of no use. No offense but this question seems like a joke.

5. Can You Install Windows 11 on Any Computer?

No, some basic requirements that need to be satisfied. If your computer is more than about 4 years old, you may have to upgrade, especially very low-end machines.

What is the Windows 11 Memory Diagnostic tool? What can it do? How can you open it with multiple methods? This article answers those questions.

To Wrap Things Up

You can install Windows 11 on 2GB RAM but you are strongly not recommended to do that. According to the user opinions in this article, despite the official minimum system requirements, 8GB is really the minimum RAM requirement in practice not only for Windows 11 but also current Windows 10 versions if you want some reasonable usage of the computer. And, if you’d like some serious working with heavy browsing and multitasking, 16GB of RAM is preferable.