What Is Power-on Self-test

What is POST? POST, referred to as Power-On Self-Test, is the initial setup of its power-on purpose to determine if there are hardware-related issues with the computer for proper diagnostic testing. The computer is not the only device running POST. Some devices, medical devices, and other devices can also perform very similar self-tests after they are powered on.

Tip: To learn more fixes for hardware-related issues, you can go to MiniTool to find the answers.

The power-on self-test is the first step in the boot sequence. It doesn't matter if you just restart your computer or turn it on for the first time within a few days. Regardless, POST will run.

It does not depend on any particular operating system. In fact, you don't even need to have an operating system installed on your hard drive to run POST. This is because testing is handled by the system's BIOS and not any installed software.

It checks for the existence and functioning of basic system devices, such as keyboards and other peripherals, and other hardware elements (such as processors, storage devices, and memory).

After the POST, the computer will continue to boot, but only if it completes successfully. The problem definitely comes after POST, such as Windows hangs during startup, but in most cases, these problems may be due to operating system or software issues, not hardware.

In computers compatible with IBM PC, the main responsibility of POST is handled by the BIOS. The BIOS will transfer some of these responsibilities to other programs designed to initialize very specific peripherals, especially for video and SCSI initialization. The principal duties of the main BIOS during POST are as follows: 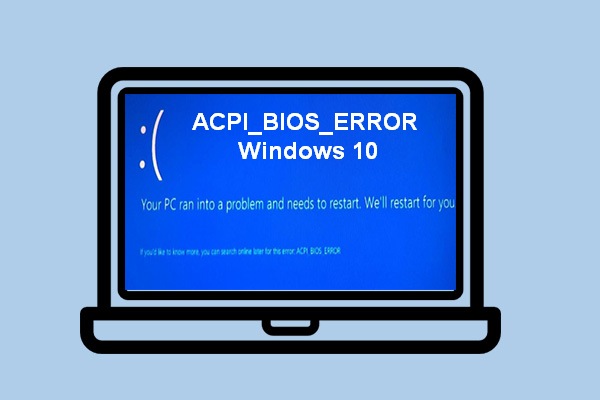 Have you ever seen the ACPI BIOS error on a blue screen? This post will tell you how to fix this BSOD error on a Windows PC in different ways.

Errors about the Power-on Self-test

Almost everything that might prevent the computer from continuing to boot will signal some kind of error. Errors can come in the form of flashing LEDs, audible beeps, or error messages on the display, all of which are technically called POST codes, beep codes, and on-screen power-on self-test error messages. The following chart is about beeps and their corresponding meanings:

Is your monitor not displaying full screen in Windows 10? This post will walk you through how to easily fix this issue to make it full screen.

If some part of the power-on self-test fails, you will know soon after turning on the computer. For example, if the problem lies with the video card, and therefore you can't see anything on the monitor.

On macOS computers, power-on self-test errors often appear as an icon or another graphic instead of an actual error message. For example, a broken folder icon after starting up your Mac may mean that the computer can't find a suitable hard drive to boot from.

Certain types of failures during the POST might not produce an error at all, or the error may hide behind a computer manufacturer's logo.

In conclusion, this post has introduced “what is POST” and the roles of it in the startup process. In addition, you have also known some errors about the power-on self-test.