This post introduces some popular live streaming platforms for gaming. You can pick a platform to watch live gaming videos or deliver live video game streaming of your favorite games. If you also need an easy-to-use free game recording software to record game clips to upload to social media, MiniTool Video Converter (with a Screen Recorder feature) is a good choice.

Twitch is one of the most popular free live game streaming platforms for gamers and game fans. People all over the world watch games on it and chat with other gamers. It also delivers broadcasts of Esports competitions, music broadcasts, and other content. Twitch contains many channels and the most-followed channel has more than 10 million followers. Popular channels on Twitch include Ninja, Tfue, shroud, Rubius, pokimane, Myth, TheGrefg, etc.

Is Twitch free? How much does Twitch cost?

Twitch is free. Following a channel is also free. But Twitch service has ads. You can subscribe to a channel to get an ad-free experience. (Related: How to block Twitch ads).

How to Clip on Twitch | Create Twitch Clips in 4 Steps

How to clip on Twitch in video game live streaming? Check the 4 simple steps to easily create video clips on Twitch.

Also as a popular cloud game streaming service, Nvidia GeForce Now lets you access a library of games hosted on Nvidia servers. GeForce Now app is available on Windows, macOS, Android, iOS, Shield TV, and Chromebook. GeForce Now is free. You can also pay for a subscription to get some priority.

Google Stadia is also a top game streaming platform that allows you to play many video games and stream games directly to other compatible devices. Stadia is capable of streaming video games up to 4K 60fps. Users need to purchase the games from its store to stream them. The basic service of Google Stadia is free, but you can buy a subscription to get more features like streaming up to 4K. 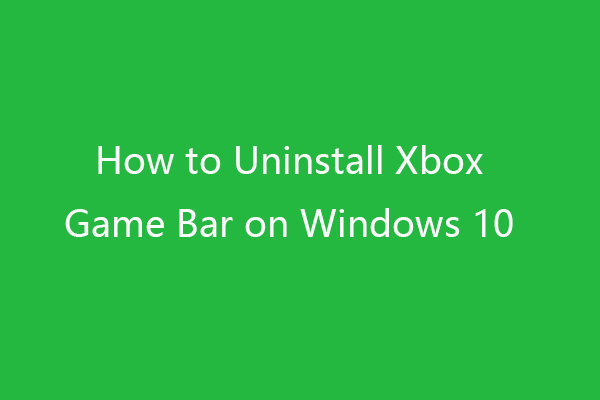 How to Uninstall/Remove Xbox Game Bar on Windows 10

Sony PlayStation Now is another popular game streaming service. It gives you access to a library of hundreds of games and you can play the games at 1080p resolution. This platform lets gamers stream games on PS4, PS5, and PC.

Another top game streaming service is Facebook Gaming. You can go to its website to play, stream, or watch live video game streams.

Parsec also lets users stream video game footage with an Internet connection. It also allows you to run a game on one computer and play it remotely on another device.

Xbox Cloud Gaming is a cloud game streaming service developed by Microsoft. This service is currently available in 22 countries.

If you are looking for the best game streaming service, you may try one of the 8 cloud gaming services above.

However, if you want a desktop game streaming software to stream games, you can try OBS Studio, Xsplit Gamecaster, Streamlabs, Vmix, Wirecast, etc.