Chromebook, laptop, and tablet are all portable devices to help you finish tasks that a desktop computer can do for you. If you know little about these devices, you’ll be confused and don’t know which one to choose. This post shows you the main differences among Chromebook, laptop, tablet, to which you can refer to get the most suitable one.

On the internet, the Chromebook vs laptop vs tablet is a hot topic among users. Why? One of the most important reasons is that people don’t know their differences and which one to choose. After reading this page, you’ll figure out which one suits your needs the most.

Tip: No matter which device you’re using, Chromebook, laptop, or tablet, you are advised to install the MiniTool software for data recovery before you really run into data loss disaster. In this way, you’re able to get back the important files immediately after losing them.

Chromebook vs Laptop vs Tablet: Introduction

Let’s first take a look at what Chromebook, laptop, and tablet are.

What Is a Chromebook

Chromebook is a new type of computer designed by Google to help users do things faster and easier. The biggest difference between Chromebook and other computers lies in the operating system: Chromebook run Chrome OS by default, instead of the Windows operating system or macOS.

Why Is My Chromebook So Slow? 9 Easy Ways To Speed It Up

The question - why is my Chromebook so slow - is bothering lots of Chromebook users, so we’d like to analyze it and provide solutions.

What Is a Laptop

Laptop, also known as notebook, refers to a small, portable personal computer with a screen and alphanumeric keyboard. Laptop is smaller, more efficient, and nearly as powerful, as a desktop computer. Nowadays, laptop is a good choice at work, for playing games, web browsing, in education, for personal multimedia, and general home computer use.

How To Factory Reset ASUS Laptop: Restore To Default Settings

This page will be very helpful if you don’t know how to factory reset ASUS laptop but want to restore it to its default settings.

What Is a Tablet

Tablet is a wireless and highly portable personal computer whose primary interface is a touch screen. A tablet looks like a very large smartphone, but functions as a mobile computer. You can carry a tablet with just one of your hands and use it wherever you want.

Chromebook is the two-in-one product first appeared in 2011. The function of Chromebook is similar to that of laptop, but they are very different from each other in the following aspects.

Since the hardware requirements of Chrome OS are very low, a Chromebook is often lighter, smaller, and even cheaper than the normal laptops.

The biggest difference between a Chromebook and a laptop is the former runs Chrome operating system while the latter runs mainstream operating systems like Windows and Mac. The Chrome OS is minimalistic and web-browser-based, so it gives users a totally different experience.

Can Minecraft Run On A Chromebook? How To Install And Play It?

They are both good choices if you are looking for a computer for remote learning with Google Classroom.

There are a lot of users don’t know the existence of Chromebook local storage, so I decide to introduce it in the following content.

All the work you can do on a Chromebook is based on the internet. If the internet connection is broken, the functions of Chromebook will be influenced a lot. However, the performance of laptops will be stable (won’t be affected) whether the network connection is normal or not.

When it comes to Chromebook and tablet, which one should you choose (Chromebook or tablet)? Let’s compare them in the following aspects briefly.

In contrast, the size of a table can be as small as 7 inches, and the weight is less than 1 pound (about 0.7).

The displays of Chromebooks are usually not as good as those of tablets. The resolution of an 11-inch or larger Chromebook display is 1366 x 768p, while the displays of smaller tablets are less than 1080p.

Chromebooks do offer touch screen, but it’s only trackpad coming with the built-in keyboard (like traditional laptop). Tablet offers a real touchscreen for easy web browsing and touch-based games playing. However, the virtual keyboard may be one of the biggest headaches of using tablet.

Both Chromebook and tablet are efficient enough for working and playing games. There’s no big difference in the battery life of a Chromebook and a tablet. 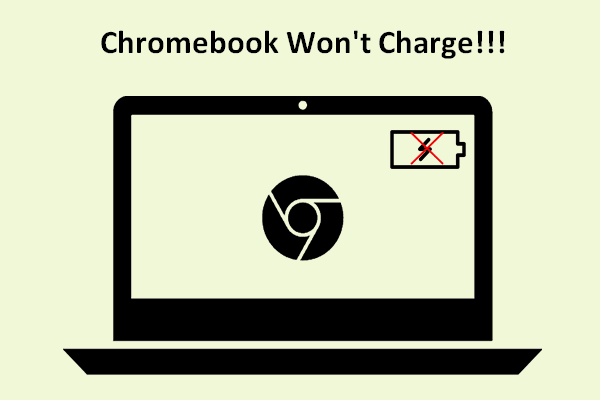 Please don’t get anxious when finding your Chromebook won't charge since there are various useful methods for fixing it.

Chromebooks are generally runing on SSDs that offer fast speed but limited storage space, ranging from 16 ~ 64 GB. However, the storage capacity of tablets is ranging from 8 ~ 16 GB for the budget models.

That’s all about the Chromebook vs laptop and Chromebook vs tablet we want to talk on this page. Please make a decision according to needs.

8 Ways To Fix A Frozen Or Unresponsive Chromebook.