Change: the Lack of Registry Backups in Windows 10

Recently, Microsoft has sounded a warning to all its 800 millions of Windows 10 users, saying the serious and long-running bug in this platform isn’t a real bug. In fact, the issue was introduced by design.

Microsoft has confirmed that it quietly switched off registry backups in Windows 10 8 months ago. Even so, some of you now think this crucial safeguarding system is still working. 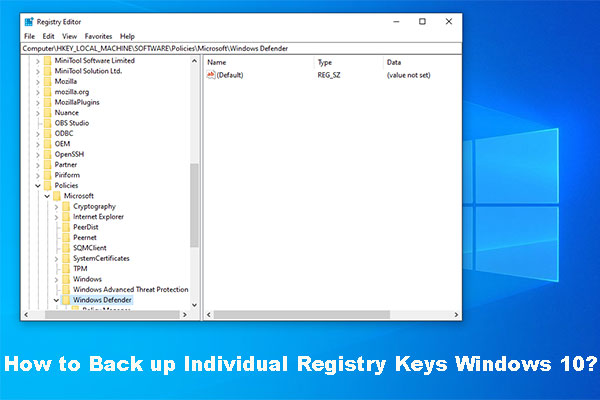 How to Back up Individual Registry Keys Windows 10/11?

Do you know how to back up individual Registry keys Windows 10? Now, this post will show you a step-by-step guidance to do this job.

Reportedly, the scheduled task to create the backups was still running and the result showed “the operation completed successfully”. However, no registry backups were created. This change was starting with Windows 10 version 1803 and all the new versions of Windows 10 are all impacted by it.

In previous versions, Windows 10 placed registry backups to the path: C:\Windows\System32\config\RegBack folder. These backups can be used as a crucial last line of defense. Once a restore point fails, the registry backup is all you have except the use of third-party software.

Reason for No Longer Auto Backup of Registry

Starting with Windows 10 V1803, Windows no longer backs up the system registry to the RegBack folder. But if you go to this folder in File Explorer, you will still view each registry hive but the size of each file is 0kb.

According to Microsoft, you should use a system restore point if you want to recover a system with a corrupt registry hive.

What Is System Restore Point and How to Create It? Look Here!

If you want to keep this feature, you can change the value of a registry key since the registry backup feature has been disabled but not removed.

The following are the step-by-step guide:

Step 1: Press Windows logo and R key in your keyboards, input regedit and then press Enter.

Step 2: After opening the Registry Editor, navigate to the following path:

Step 5: Double-click on the key to set the value to 1.

Step 6: Restart your computer. From that point, Windows 10 will back up the registry again to the RegBack folder. It creates a new task with the name RegldleBackup to manager all subsequent registry backups. When opening Task Scheduler, you can view the task.

Now, you have learnt some details on the lack of registry backups in Windows 10 version 1803 and newer versions and how to make automatic registry backups. Just change the registry value based on your needs.

Simply put, backups are handy even though they take up some disk space. It is generally recommended to use a third-party backup software as well, like MiniTool ShadowMaker.