Docker is one of the leading platforms for building and running software containers. However, you may receive the “cannot connect to the Docker daemon at unix:///var/run/docker.sock. Is the docker daemon running?” error message when using it. This post from MiniTool tells you how to get rid of the issue.

Docker is an open platform for developing, publishing, and running applications. Docker enables you to decouple your application from your infrastructure so you can deliver software quickly. 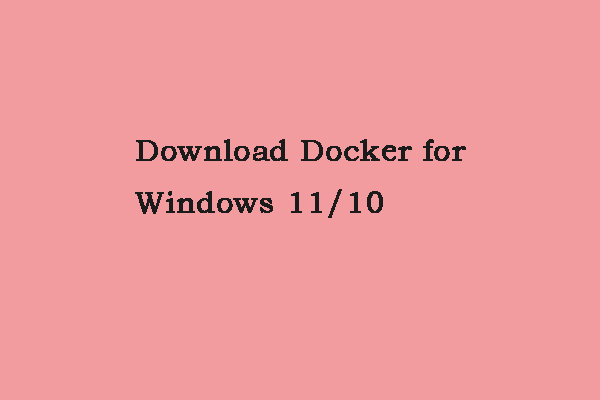 How to Download Docker for Windows 11/10? Here Is a Guide!

What is Docker? How to download Docker for Windows 11/10? How to install it? If you want to know the answers, this post is what you need.

After installing it, you may receive the “cannot connect to the Docker daemon at unix:///var/run/docker.sock. Is the docker daemon running?” error message. What causes the error? There are some possible reasons.

The following is about the solutions to the “cannot connect to the Docker daemon at unix:///var/run/docker.sock. Is the docker daemon running?” error.

Method 1: Use Systemctl to Start the Docker Service

If you have fresh installed Docker on Ubuntu, the Docker service maybe not running. The systemctl command replaces the old SysV init system, which manages systemd services running on Linux systems. If you don't have systemctl in your system, you can run the following command:

Step 2: Execute the following command one by one and press Enter after each one.

Then, you can check if the “cannot connect to the Docker daemon” issue has gone.

Method 2: Use Snap to Start the Docker Service

If you installed Docker with the Snap package manager, you can use the snap command to manage the docker daemon.

Step 2: Execute the following command one by one and press Enter after each one.

Step 3: If the above command doesn't work for you, try connecting the docker:home plugin as it doesn't automatically connect by default. Once done, start the Docker service. Then, run the following command.

Step 1: Launch the Terminal and execute the commands below:

Step 2: Then, excute the following command:

You can also try to export the Docker host variable to localhost via port 2375. You need to execute the command - export DOCKER_HOST=tcp://localhost:2375.

If the above solutions are not working, it’s recommended to reinstall Docker. You can go to the official website to do that.

These are common solutions to fix “cannot connect to the Docker daemon at unix:///var/run/docker.sock. Is the docker daemon running?” in Docker. If you have any other useful methods to remove this error, leave a comment below to let us know.