Microsoft has released Microsoft Windows Malicious Software Removal Tool update KB890830. You can download and install the update on your Windows 11/10 now. This post from MiniTool tells you how to get it and how to fix the issue of the KB890830 update. 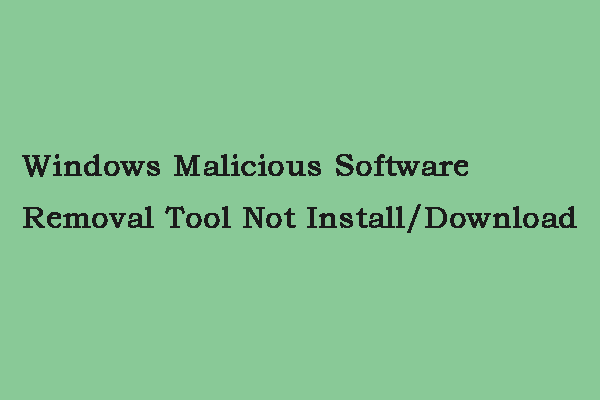 Is Windows Malicious Software Removal Tool not installing or downloading? This post provides 5 feasible and useful methods for you to fix the issue.

Microsoft typically releases MSRT monthly, either as Windows Update or as a standalone tool. A new version of the Malicious Removal Tool (MRT) has been released as Windows Malicious Software Removal Tool x64 - v5.100 (KB890830) on April, 6th 2022.

In this post, we will talk about the new Windows 10 security update Windows 10 KB5008876, and how to get it on your computer.

The commonly used method to install this optional update is using Windows Update in the Settings app.

Step 2: Click the Check for updates button and then you can see this KB890830 update.

Step 4: Click Restart now to restart your computer to complete the whole process.

Microsoft also offers direct download links for KB890830. This is good for the users who want to install the update manually.

Step 1: Go to the download page of KB890830 from the Microsoft Update Catalog.

Step 2: Find a proper version according to the version you are currently using. Then, click the Download button next to it.

Step 3: Microsoft now offers offline installers via a secure connection (HTTPs). So, you can just click the .msu link and the download process automatically starts.

However, some users report that they encounter issues after updating KB890830. Here is a user’s report:

I found the cause for mrt.exe error – it was caused by update kb 890830. The odd thing is, that I only use Windows Defender on my machines.

If you also encounter the issue when updating to KB890830, it’s recommended to uninstall the KB890830 update. Here is how to do that: