Phison PS5013-E13T 1113 BGA SSD is a new drive which is reported to be released next year. The company showcases it at the Flash Memory Summit this year. Now, read this post to learn more information about it. Well, if you are looking for tools to manage your SSD, try MiniTool software.

Phison Electronics, the first and only enterprise shipping PCIe® Gen4x4 NVMe SSD solutions, is an industry leader in supplying high-performance computing for bandwidth-hungry applications. Flash controllers and NAND solutions are the business scope.

To develop its solutions and attract more users, the company always designed new generation products according to the requirement of the global market. 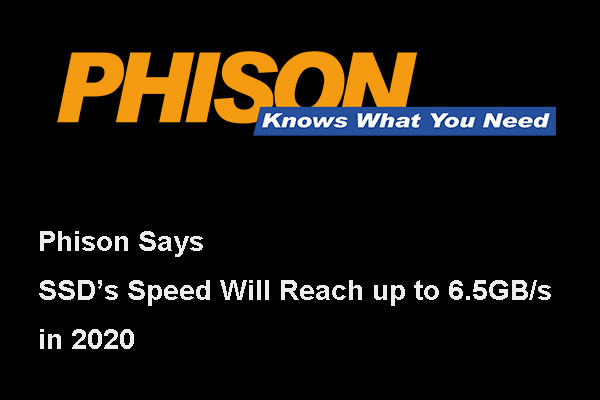 Phison says that SSD’s speed will reach up to 6.5GB/s in 2020. Now, you can read this post to learn what happen to PCIe 4.0 and Phison’s further decision.

This year, the Flash Memory Summit (FMS) is held at Santa Clara Convention Center in Santa Clara, California from August 6 to 8. Phison Electronics participates in this exhibition. It demonstrates its next-generation turnkey BGA SSD at the exhibit and this drive is Phison PS5013-E13T 1113 BGA SSD.

Phison PS5013-E13T BGA SSD is a tiny drive that is using a 324-ball BGA packaging. The company says that it is faster than its BGA predecessor when consuming around half the power.

Tip: Usually, you save some important files on the SSD. However, these files may get lost by mistake. In this situation, you can use a professional data recovery software, MiniTool Power Data Recovery, to get them back.

When selecting a data storage drive for use, the most concerned point is its performance of data transfer speed. Now, we list the detailed data of each capacity in the following content (this is theoretical data that is supplied by the company and the real data may vary due to the actual situation).

All data is in TBD state currently.

Besides, the drive is relying on Host Memory Buffer (HMB) rather than DRAM.

Compared with the company’s current-generation SSD, Phison PS5008-E8T BGA SSD (rated for up to 1550/950 MB/s read/write speeds), this new Phison PS5013-E13T 1113 BGA SSD is not radically faster. But, its most important advantage is power consumption.