With the rise of mobile computing on smartphones and tablets, Microsoft developed a system for it, called Windows RT. This post from MiniTool introduces what it is and how to download and install it.

What Is Windows RT

What is Windows RT? Windows RT is a tablet operating system, which is a special edition of Windows 8. It runs on ARM and it can be used with Intel x86 computers. Windows RT has been updated to Windows RT 8.1.

Windows RT is optimized for thin and light PCs with longer battery life and is designed for mobile living. Windows RT 8.1 only runs built-in apps or apps you download from the Windows Store.

Tip: Microsoft ended the mainstream support for Windows RT/Windows RT 8.1 in January 2018. However, extended support will continue until January 10, 2023. 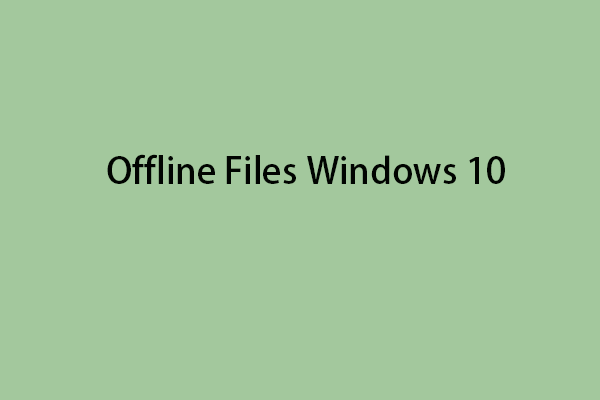 How to Enable/Disable/Configure Offline Files Windows 10/11?

With offline files, you can access copies of network files even when your network is not working. This post tells you how to enable/disable/configure it.

The design and basic features of Windows RT are similar to Windows 8 and Windows 8.1. When you first start your device, the full-screen Start menu displays live tiles that update throughout the day. The Start menu screen is customizable. You can pin your favorite apps and resize their tiles. Swiping up from the bottom of the screen displays a list of all currently installed apps.

All Windows RT devices include Office 2013 Home & Student RT, which initially includes Word, PowerPoint, Excel, and OneNote. While traditional desktops are accessible, there are very few options there. There are File Explorer, Internet Explorer, and Office RT in desktop mode.

The following are the devices that can be used to run Windows RT/Windows RT 8.1.

Step 3: Choose a path to store the download package.

Windows 10 is not available for devices that run the RT version of Windows like Surface RT and Surface 2. There may be some W10 features available for these devices if you believe some of the third-party tech sites. But not the full Windows 10.

How do I personalize my Windows RT 8.1 PC?

There are several ways you can personalize your Windows RT 8.1 PC. You can customize your Start screen, change colors, set a picture password, add languages, sync favorites, and settings between PCs, and keep all your friends, contacts, emails, and photos together.

How much free space do I need to update to Windows RT 8.1?