First of all, what is a hardware VPN? You may know VPN very well and depend on it every day but that’s just all about software VPN. There is another definition appearing to attract your attention – hardware VPN. So, what does it use for? This post on MiniTool Website will tell you the related information

The most commonly used in our daily life is the software VPN (Virtual Private Network). Hardware and software VPNs are used for the same purpose and for most of their functions, there are only a few nuances. As usual, hardware VPNs are popular among large-scale corporations.

So what is a hardware VPN? 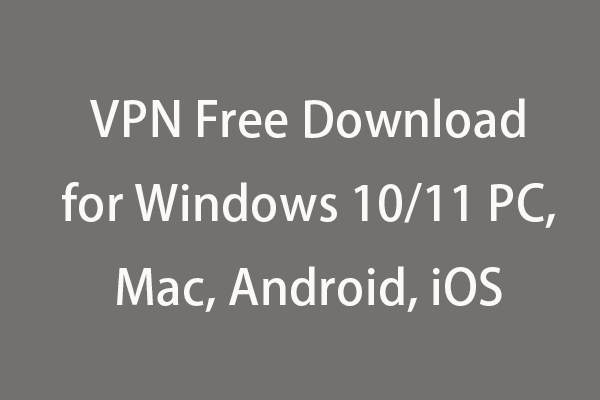 This VPN download guide teaches you how to download a free VPN for your device. List of top free VPNs for Windows 10/11 PC, Mac, Android, and iOS are offered.

What Is Hardware VPN?

Hardware VPNs boast many advantages that can contribute to securing a stable network. For example, it can offer high-level security and a dedicated IP; it can help you access the internal office network and other office branches over a long distance.

But there are some troubles. It is hard to set up a VPN hardware, which requires advanced technical knowledge. That is why people or small businesses are prone to use software VPNs.

Let’s do this report about hardware VPN vs software VPN and you will see which one is suitable for you.

It is generally admitted that hardware VPN has a faster speed than software VPN. Hardware VPN functions with a dedicated CPU; software VPN depends on a client app, which makes the Internet speed of software-hardware lag far behind.

But as time goes by, software VPN is widely accepted by more people and its performance and Internet speed get improved accordingly. Nowadays, it is hard to determine a winner in their speed.

It is noticeable that hardware VPN is costlier than software VPN. For software VPN, you only need to download an app on your phones or computers and pay a small sum for your monthly subscription.

A piece of hardware VPN can cost hundreds to thousands of dollars. At the same time, how to set up it is also another tough issue. It requires people with technical knowledge to set up, configure, and maintain. That’s why the hardware VPN is only used in large corporations.

In fact, whether hardware VPN or software VPN, they are both highly encrypted to ensure that the users’ data and online activities are private and protected.

However, without any anti-virus protection, if you accidentally click some untrusted links when using a software VPN, you are in danger of some online threats.

To see VPN router vs VPN on device in this way, hardware VPN is superior for it operates in a strictly controlled environment with less risk.

The greatest advantage of software VPN is its flexibility. Hardware VPN requires more complicated operations to upgrade. Especially for a business, you need to upgrade your VPN scalability with the development of your business.

Each hardware VPN only provides a limited number of VPN tunnels, which means you need to invest more money in this physical device. But if you use a software VPN, the only thing you need to do is to buy additional services for your new employees.

What Is VPN Split Tunneling? How to Enable It on Windows 10?

This tutorial will show some information about VPN split tunneling, like its functions, types, cons, and pros. Then you can also learn how to enable it on a PC.

VPN plays an important role in your Internet life. It boasts many advantages that are useful to protect your privacy. The hardware VPN may be your other choice and you can also choose the optimal for your demands.

Thanks for your reading.