This essay from MiniTool company mainly discuss the Professional Edition of PlayStation 5 consoles. If you are interested in video games, game consoles or computer hardware/software, just seek through this website.

This article is first written on October 30th, 2020, 13 days before the official-announced PlayStation 5 (PS5) release date (November 12, 2020), and Halloween is coming… Since the standard version of PS5 hasn’t been released yet, is a Pro edition possible?

With each generation of PS has different versions just as listed below, whether PS5 will have sub edition(s) or not? Or, will PS5 has Pro or Slim, or both like its predecessors?

Sony has displayed a basic main PS5 with a disc drive and the digital edition of PS5. Yet, it hasn’t revealed a PS5 Pro yet. Even though, a great many game enthusiasts are already expecting the Pro version of PS5 for it will most likely come into our life sometime in the future according to the PlayStation releasing history. 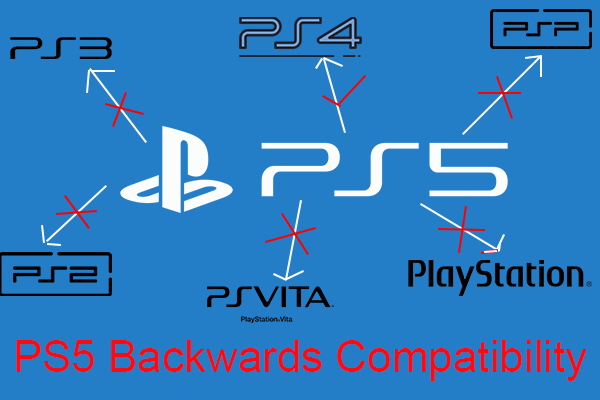 Why So Many People Fond of PS Pro?

As the “Pro > professional” itself indicates, this edition is advanced than the standard edition of each PS generation. The Pro versions are improved and optimized based on their corresponding standard versions. So, they are more powerful.

For each Gen. of PS, the standard edition will take advantage of many new technologies that are developed in the last few years since the release of the last PS generation. Whether those advanced skills are well included in the new console and can serve gamers better or not, it needs tests. So, in other words, the first army of users of new PlayStations can also be called “beta testers”.

Tip: As a giant tech corporation like Sony, which has the top technical team in the world, I believe that it can apply the latest technologies into its products very well. Yet, there are still chances that some technical problems will appear while using the new products.

After several months of usage, the problems of the new-released consoles will mostly be encountered and reported to Sony by those users. Then, Sony will work hard to solve those problems and improve the machine’s performance. After 3- 4 years, the improved edition, Pro for example, of PS will be released.

Besides problem fixing, the PlayStation Pro also has been improved on some configurations and technologies. Let’s take PS4 and PS4 Pro for example to show you how the Pro version wins. The following is a table comparing some aspects of those two editions.

As you can see from the above table, the PlayStation 4 Pro owns larger storage space, advanced CPU and GPU than the standard PS4. And, it sells the same price as PS4 Standard edition. Therefore, users prefer advanced PS4 Pro. Similarly, they will like PlayStation 5 Pro more than PS5 when the former is released.

This article introduces three methods for how to transfer data from PS4 to PS4 Pro: PS4 console to PS4 Pro, through cloud storage and via external hard drive.

When Will the PS5 Pro be Released?

How Much Will PS5 Pro Take?