Now, let’s welcome the first may update for Windows 11: Windows 11 2022 Update. For gaming lovers, it is good news that this Windows 11 update boosts PC gaming. Now, you can read this post from MiniTool Software to understand these new gaming features.

Windows 11 2022 Update is available now. You can read this post to learn the new features and enhancements in this new Windows 11 update.

If you want to upgrade from Windows 10 to Windows 11, you need to use PC Health Check or another Windows 11 2022 Update compatibility checker to check if your PC can run Windows 11 22H2.

Game players are more concerned about whether there are changes to improve the game experience. Of course, yes. There are several gaming improvements after you upgrade to Windows 11 version 22H2. For example, you can find a new Controller bar in this update. There are also optimizations for windowed games and a wider range of HDR calibration options. The existing features like Auto HDR, DirectX 12 Ultimate, and DirectStorage are also updated.

The new Controller bar is just like the above screenshot. It will be easier to open the game you want to play. You can press the Xbox button on your Xbox controller to open the Controller bar. Then, you can see the recently played games and game launchers in the bar. You can click the icon to quickly access them.

Windows 11 2022 Update also brings graphical improvements. Windowed games that are running DirectX 10/11 will have dramatically improved display latency. Besides, these games also have better Auto HDR and variable refresh rate (VRR). Before that, DirectX 10 and 11 games only have those improvements when running in fullscreen.

The latest Windows version also has a new HDR Calibration app that helps users to improve color accuracy and consistency of content on HDR displays.

AutoHDR, DirectX 12 Ultimate, and DirectStorage are the previously existing features on Windows 11. This new update also boosts these features. For example, Auto HDR is supported on more titles and DirectStorage supports more configurations, including RAID 0. 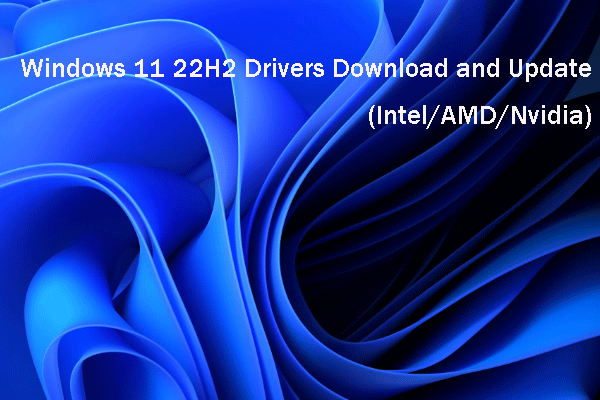 In this post, MiniTool Software will tell you how to download Windows 11 22H2 drivers (Intel, AMD, and Nvidia) on your Windows computer.

Microsoft added a Gaming page to Edge. This feature has been introduced to both Windows 10 and Windows 11 earlier this year. With this page, you can easily earn Microsoft Rewards points that can be redeemed for an Xbox Live Gold or Xbox Game Pass Ultimate subscription. It also helps users to jump into the Xbox cloud gaming (Beta) library, including recently played games. Clarity Boost enhances the gaming experience for Xbox cloud gaming.

Have Not Received a Windows 11 Update Push?

Microsoft doesn’t roll out Windows 11 2022 Update to all users at the same time. The most eligible PCs receive the update before others. So, if you still haven’t received the update prompt, you don’t need to worry about it. When everything is ready, it will come. But you need to make sure that your computer meets the basic hardware and system requirements for Windows 11.

Before you update your system, you’d better back up your files and system to an external hard drive using MiniTool ShadowMaker to keep your data safe.

If your files get lost but there is no available backup, you can use professional data recovery software like MiniTool Power Data Recovery to rescue them.

Should you have other related issues that need to be fixed, you can let us know in the comments.