It is said that Windows 12 will be released in 2024. This saying is supported by corresponding evidence. In this article, MiniTool Software will show you relevant information that may be of interest to you.

Recently, Windows 12 news like Windows 12 release date 2024 has been very hot. Some users may say that it has been less than a year since the official initial release of Windows 11, will Microsoft begin to arrange the deployment of Windows 12?

Here, we have to mention Microsoft’s Windows development cycle. Since Windows 7, Microsoft kept releasing a major Windows update every 3 years.

Since then, Microsoft hasn’t released a signal to release a new Windows version for a long time, so many users thought that Windows 10 was the last version, and Microsoft would only update Windows 10 to bring new features, bug fixes, and improvements.

But in June 2021, the rumors about Windows 11 were out. Microsoft admitted the Windows 11 information quickly. Then, on October 5, 2021, Microsoft released Windows 11 to the public with new hardware and system requirements.

You may discover that the previous release rule has been broken: Windows 11 was released 6 years after the release of Windows 10. At this point, users don’t know the Windows development cycle.

But recently, we get a new piece of information: Microsoft is planning to shift to a new engineering schedule for Windows operating system which will see the company return to a more traditional three-year release cycle for major Windows versions.

According to the new Windows development cycle, Microsoft will keep releasing a new Windows version every 3 years. Due to this, the next version of Windows should be Windows 12 and it should be released in 2024.

It seems that Windows 12 release date 2024 is not a rumor. There is solid support for this statement. 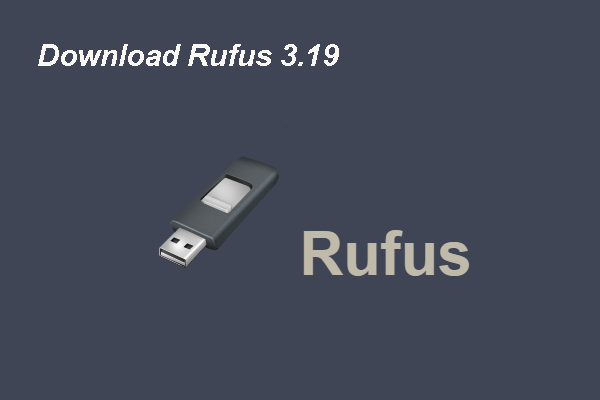 In this post, we will show you how to download Rufus 3.19 for Windows 11 and Windows 10, and the new features in this new version.

Microsoft has stated its new Windows development cycle with major releases every three years. Windows 12 should be the next version of Windows. Windows 12 release date should be one day in 2024. Currently, there is no further information about Windows 12.

Microsoft may begin the development of Windows 12 or it is planning to do this. Currently, the focus is still on Windows 11. But the outflow of the Windows 12 information has made us look forward to the generation of the Windows version a little more.

Use Rufus to Install Windows 11 22H2 without a Microsoft Account

You can use Rufus 3.19 to install Windows 11 22H2 without a Microsoft account on a new device. Here is the related information.

If you want to use Windows 11 22H2 earlier than others, you can join the Windows Insider Program and select the Beta Channel, then upgrade your computer to Windows 11.

Windows 11 FAQ: Everything You Want to Know about Windows 11

In this post, we will show you some Windows 11 frequency asked questions that can help you decide whether to upgrade to Windows 11 and how.

Before you upgrade your system to Windows 11, you’d better use MiniTool ShadowMaker (dedicated Windows backup software) to back up your files and system to keep them safe.

If your files are lost after a Windows 11 upgrade but there is no available backup, you can use MiniTool Power Data Recovery (professional data recovery software) to get them back.

How to Recover Your Lost Files after Upgrading to Windows 11?

This post shows you the methods to recover your lost files after upgrading to Windows 11 and some related information.

If you have other related issues, you can let us know in the comment.