This article depicted by MiniTool Software Limited mainly compares snapshot and backup and discusses the differences between them. It takes VM environment and server database as an example to show you how they are different from each other. Besides, this post teaches you how to create backups on Windows computers.

A backup (data backup), in information technology, is a copy of computer data taken and saved elsewhere. When data damage or data loss happens, it can be used to recover the original data. the noun or adjective form is “backup” while the verb form is “back up”. A backup system includes more than one copy of target data.

In VMware workstations and servers, snapshots and backups execute similar actions but serve different purposes. Both snapshot and backup reserve VM data, but they are suitable for different situations. Administrators cannot take snapshots as backups or vice versa.

Backups save VM data as a direct copy in a separate location like the external hard drive or the cloud, which allows admins to restore the original VM data for disaster recovery (DR) purposes. Snapshots rely on delta files to temporarily store VM data locally.

Snapshots depend on dependent files for VM restoration while backups are independent and self-contained files that do not need cross-file dependencies to restore a VMware.

VM backups make exact copies of a VM that the system saves separately from the primary VM files. VM backup software like Veeam Backup & Replication and Veritas NetBackup copy a VM at specific intervals and move those copies to another address. During the backup, data compression and deduplication technologies may be applied.

Once the primary VM fails, the system retrieves the backup from the storage repository and restores the VM to the state when the backup was created.

VM snapshots permit admins to maintain VM data including files, memory, configurations, and power settings at a specific point in time. A system creates snapshots as incremental delta files or changelogs that track any changes made since the previous snapshot. Such a process happens automatically. It offers a chain of connected delta files. Thus, admins can combine a specific snapshot with any archived snapshots and the original virtual disk to recover a VM.

Cold backup vs hot backup: what are the definitions of them? How do they work? What are their benefits and drawbacks? How to perform a hot backup?

Saving backups in a separate location is good for isolation. So, when natural disasters and virus attacks occur, admins can quickly restore the corrupted or lost data without accessing the original files or location. That offers more reliable VM data protection.

Some VM backup software requires installing an agent on the guest operating system (OS). Thus, more hard disk storage should be provided. And, with the use of the backup program, it may take growing space that might result in slow OS performance.

Since the virtualization layer sits between the physical hardware and the guest OS, the agent must go through the software layer to obtain the VM data. Thus, unnecessary resources are needed. In a situation where multiple backup tasks are conducted simultaneously, admins may encounter system stuck and bad system performance.

Furthermore, admins might have to pause VMs to carry out backup operations to make sure all data is backed up. Within a given period, limited copies of backups can be performed. Backup procedures can be time-consuming and source-intensive, which is unfriendly to host performance and app availability.

What are offsite and onsite backup? Why should backup media be stored offsite or onsite? How to create an onsite or offsite backup? Click here!

Snapshot files are storage-saving for they are kept as delta files and no exact VM replicas. Admins don’t have to wait for backup files to download from another location since the system is able to store snapshots alongside existing VM files.

Snapshots use up disk space quickly. During a given period, a lot of snapshots can be taken. So, admins can’t keep old snapshots for a long time.

VM Snapshots are useful for development and testing purposes. They make it easy to restore a VM to a point in time before test runs, configuration changes, data modification, software upgrade, new app deployment, and so on. Moreover, snapshots enable admins to restore a VM after cyberattacks.

VM backups remain an essential part of any DR plan. Backups can protect data from corruption, cyberattacks, as well as natural disasters. Besides, giving double insurance to important data, backups place themselves in different locations for live VMs. 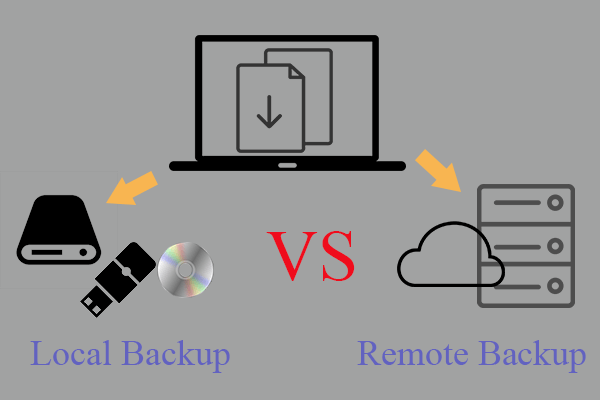 What are remote backup & local backup? What are the differences between them? How to make local or remote backup via professional, reliable, and free solution?

In this part, we will compare the difference between backup and snapshot in SQL server. The following is a list of the differences.

Backup takes minutes, hours, or days to complete, depending on the amount of data. Whereas snapshot is a short-term process and it takes very little time compared to backup.

#2 Consistency to the Original Copy

Backups can be stored for a long period while snapshots are only retained for a short term. When space departs, new snapshots eventually overwrite older ones.

Backups can be saved in the same or another location, internal or external devices, fixed or removable disks, online or offline location…However, snapshots can only be put in the same location as the source.

In SQL servers, backup software is charged while snapshot services are free.

A backup is used to restore previous data while a snapshot is used to revert to a recent version of your server.

#7 The Relationship Between SQL Server Backup and Snapshot

Snapshot by itself isn’t a backup. However, it can be used as an essential part of the backup process. Snapshot is used as a part of the data movement process to a backup file. When the backup finishes, the essential snapshot will be removed. That is to say, a backup of all the files on your computer essentially creates a snapshot.

Backup VS Recovery: What’s Difference? How to Backup & Recover?

This post gives a detailed guide on backup vs recovery and how to back up your PC and recover data from multiple situations with MiniTool software.

What Is a Snapshot Backup?

Here, a snapshot backup is the combination of snapshot and backup. The two kinds of data protection solutions are not mutually exclusive. Therefore, the best practice for data protection is adopting a backup strategy consisting of both backups and snapshots.

Carrying out regular backups together with snapshots in between enables you to secure data while also staying on top of version control. For example, you can firstly take a snapshot of the target files to ensure the data is consistent with an exact time. Then, back up the snapshot to another place to avoid data loss due to disasters.

Now, let’s learn something about backup vs snapshot in personal computers (PCs). The differences between snapshot and backup in PCs are similar to those in VMware and servers. Generally, a backup is an independent copy of previous target data that can be stored forever without outside destruction. It can be used to restore important files once the original items are unavailable. Whereas a snapshot is an instant duplication of the state of the target and it can’t stay for a long period. You can rely on it to recover to the exact condition of before.

Besides, the tools used to create backups and snapshots are also unlike. Here, we will introduce a professional and reliable program that is good at making backups for files/folders, operating system (Windows), partitions/volumes, as well as the entire hard disk drive. It is called MiniTool ShadowMaker.

Let’s see how to make use of this software to build different backups for your crucial files.

1. Download, install, and launch MiniTool ShadowMaker on your computer.

2. If it requires purchase, just click the Keep Trial button to continue.

3. When you enter its main interface, choose the Backup tab from the top menu.

4. In the Backup tab, click on the Source module to select the files or folders you’d like to back up.

5. Click the Destination module to pick up a location to save the backup image. You are able to choose a local location, an external address, or NAS/shared network.

6. Click the Schedule button below, switch on the schedule setting in the new popup, and define your favorite backup schedule to enable automatic backup in the future.

7. Click on the Scheme button, toggle on the scheme settings in the new window, and set up a proper backup type, full, incremental, or differential.

8. Finally, click the Back up Now button to start the process to perform an initial full backup.

When the backup task completes, your data is fully protected from now on. As for the changes of the target files happening in the future, MiniTool ShadowMaker will automatically make a backup of them at a regular frequency based on the schedule you have created.

Backup vs snapshot are similar in data protection by both making another copy of the target and restoring the original item from the copy. However, they are not the same thing for they play a different role in data security. Backup is a solution for long-term protection while the snapshot is only useful in temporary file safety.