What is Blue Screen of Death?

Blue Screen of Death (BSoD), also known as a stop error, is a term to describe an error screen displayed on your computer if you are using a Windows operating system. The appearance of it is often due to a fatal system error, you can also call it a system crash - when the operating system reaches a state where it can no longer operate safely.

The Blue Screen of Death occurred for the first time in Windows NT 3.1, and it has made its appearance in subsequent Windows versions since the operating system instability issue happens from time to time, especially the Windows 9x series that had experienced the greatest number of BSoDs.

When a Blue Screen of Death occurs, you might think will it hurt your computer, while the answer should be no. The purpose of its appearance is to protect your computer since the computer meets an error so that it cannot run properly.

Well, even the purpose of a BSoD is to protect your computer, it is still frustrating when you meet a blue screen since it will cause you to lose everything you are running. Image if you are doing some important work and suddenly your computer screen becomes blue, that is bad!

Tip: Well, if you meet a situation like this, don’t worry. Here this post How to Recover Data after BSOD & How to Fix Blue Screen of Death is helpful.

Let's see what are the interface and information of the blue screens on different versions of Windows to know why it is protecting your computer.

The blue screen for Windows 95 and Windows 98 is shown below. It can be seen that there is very little information on the blue screen interface at the time. 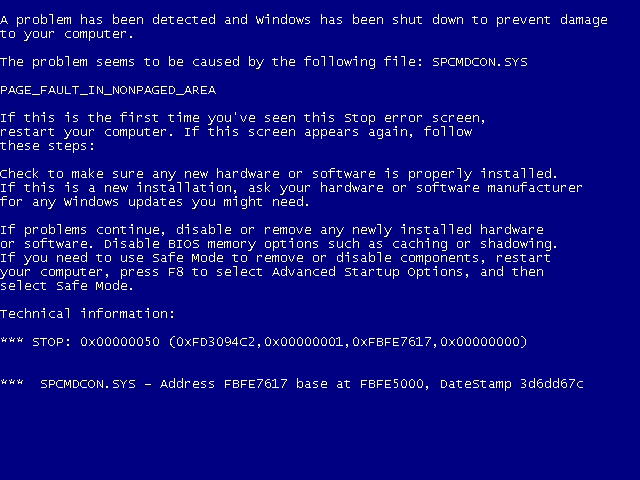 Nowadays, many of you are using Windows 8/10. When you encounter the same blue screen above, follow this guide to solve the issue: Quickly Solve - Your PC Ran into a Problem and Needs to Restart.

You can see when a blue screen shows up, the common situation is that the normal computer running screen becomes a screen with white words on a blue background. The white words are information to let you know what you are going through, and normally the specific reasons why the blue screen appears.

The first part of information indicates that your computer has stopped working.

The second message indicates the possible cause of your computer's Blue Screen of Death. This section does not exist in all blue screens

Next is the suggestion to restart your computer or some other advice.

The content of the final technical information is the key part: these are the blue screen codes. Generally, the first code is used to identify the type of error that has occurred, the parameters in parentheses specify the reason for the BSoD.

The blue screen code for fine classification can be queried by Microsoft official, but the other codes might need to be viewed with tools (such as BlueScreenView).

What Cause the Blue Screen of Death?

In fact, every time the screen appears on your computer, there will be the blue screen codes too. These codes are the specific reasons why your computer will meet the stop error.

The most common cause of the Blue Screen of Death is incompatible DLL files, which means incompatibility caused by multiple versions of the same DLL. When an application needs to use these DLLs, Windows loads them into memory; if the DLL is replaced, it may not be the desired version of the application the next time it loads the DLL.

Another important reason is hardware problems, such as hardware incompatibility, hardware overheating, overclocking, hardware damage and BIOS settings errors or code errors may cause a Blue Screen of Death.

Some other reasons like faulty or poorly written device drivers, Kernel bugs, or Windows updating can cause a Blue Screen of Death.